Before this last week, another week of COVID-19 controversy, millennia had passed since I last touched, let along played an organ. My hair is whiter, my gut is larger, and it is very clear that many people working professionally in the arts are left abandoned, alienated and overwhelmingly vulnerable. I could write a book about my experiences alone over the last few months without even attempting to extrapolate on the complexities and intricacies of the global ‘new normal’!

When I first started playing the organ, £20 a service in Droylsden, Tameside, I had little interest in ever playing professionally. Yes. I adored the instrument but playing for services served to top up my paper-round and to perplex my feet. My feet remained perplexed for many, many months. Over a decade later, my, how things have changed. I studied the organ at The Royal Northern College of Music and have played professionally ever since. The instrument is magnificent with heritage, music and technology beyond any meaningful comparison!

Going back to my paper-round days, not long after taking up an organist post at Hurst Cross, Ashton-under-Lyne, I whitened my parents hair and redefined their wrinkles.

I bought an organ pedal-board, similar to the one below.

These are big, heavy and wholly cumbersome in the tiny box-room that I used to inhabit at my parents' house. They used to remind me of this on a regular basis! It was probably assumed that finally, I had lost my mind. It was the main bit I needed to build a home practice organ, the bit for my feet.

Anyway, I had saved for this to be converted to a MIDI pedal-board by George Sixsmith and Sons in Mossley. I hadn’t yet gained the technical knowledge and skills to embark upon this myself. This basically means, it can be connected to a computer and it will play a virtual organ on a programme called Hauptwerk. Please don’t sigh, it’s not another Hauptwerk conversion post – that’s a future post!

Why don’t you just play a real one Jason? Just in case you can’t appreciate the size of some of these magnificent instruments, have a look at this...

A pedalboard, on its own, wouldn’t be very useful or exciting. I cobbled together a couple of old MIDI keyboards, hastily duck-taped together. Voila! I had my first practice organ. Unfortunately, after moving several times I was forced to dismantle and sell it due to space and I went back to practicing in churches up and down the country.

Sadly, I don’t have a picture of my first Shelleskian creation – my, it was a chaotic contraption!

For years since, I have wanted my own practice organ back, not one so hastily taped together I might add. Don’t get me wrong, I have been extraordinarily lucky to practice regularly on some of Yorkshire’s, Lancashire’s and Greater Manchester’s finest (and in some cases, most dilapidated!) organs. After almost four months of COVID-19 restrictions and not having any access to any. It was time. Time get out my arsenal of persuasive tactics and sit down with the wife. A new musical instrument was necessary and on the brink of creation. It just so happens, we would have to rearrange our living room and relocate our piano to accommodate it….

Many opportunities to purchase, convert or dismantle and rebuild a variety of organs appeared and disappeared over a few weeks. My most memorable offer was 166K, yes £166,000 (!), I’m not sure this was quite the ‘budget’ or ‘practice organ’ I had requested or envisaged. That’s more than my mortgage.

After hunting and haggling for a few weeks, I was starting to get despondent until I came across a 1989 Makin Electronic Organ for a bargain price in Halifax, of all places. The organ was in remarkable condition and (almost!) fully working and had belonged to a retired accountant. Remarkably, for the money, it has physical draw stops on either side. I will bore you with how all of this works in the future.

Perfect. I thought. It ticked almost all the boxes. Before buying, I had a play for ½ an hour and thankfully, there were only a few minor issues including a panic-stricken toe piston!

I took the plunge, which, as you can see from the pictures, I can’t take any credit for actually moving it. 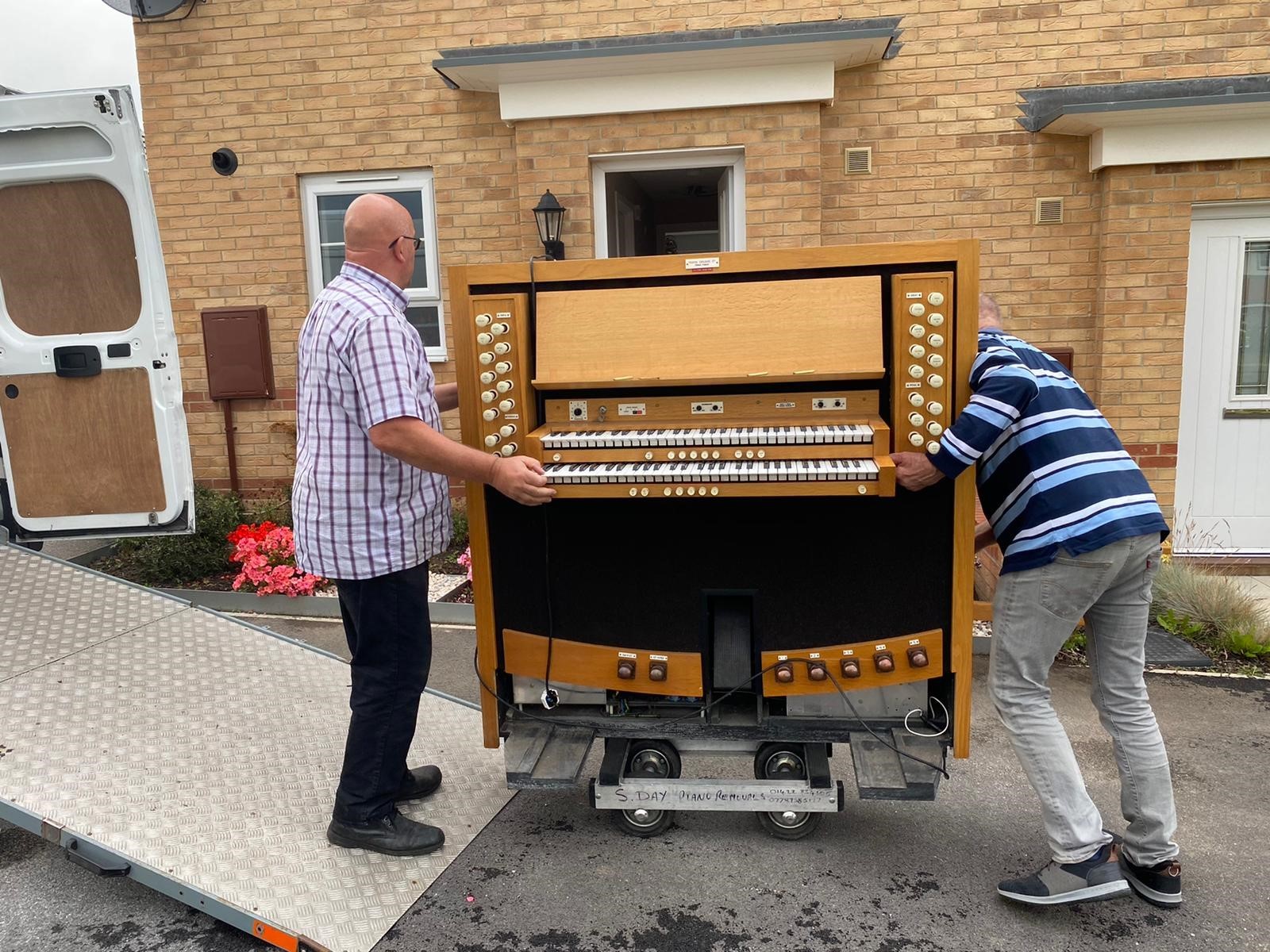 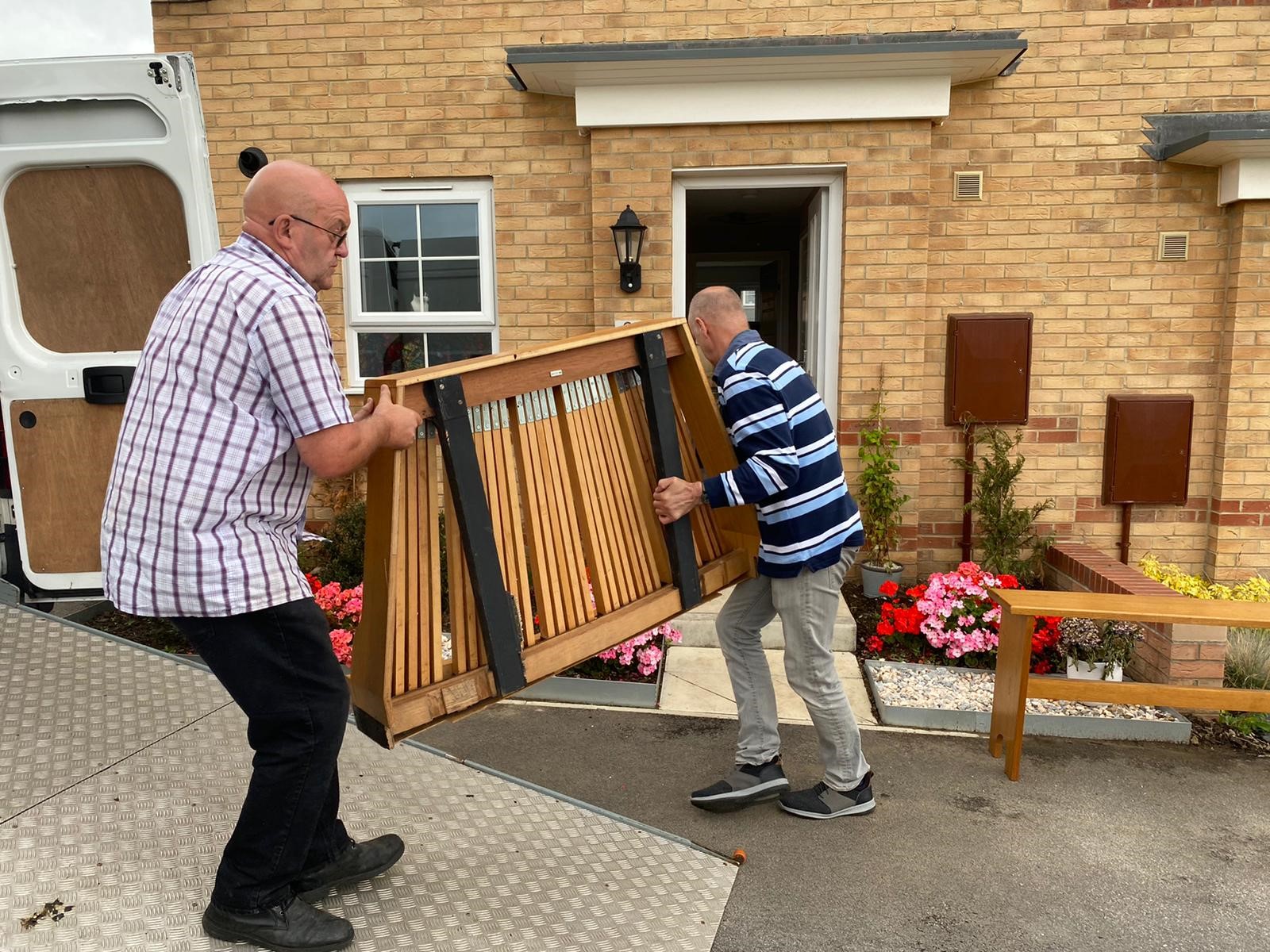 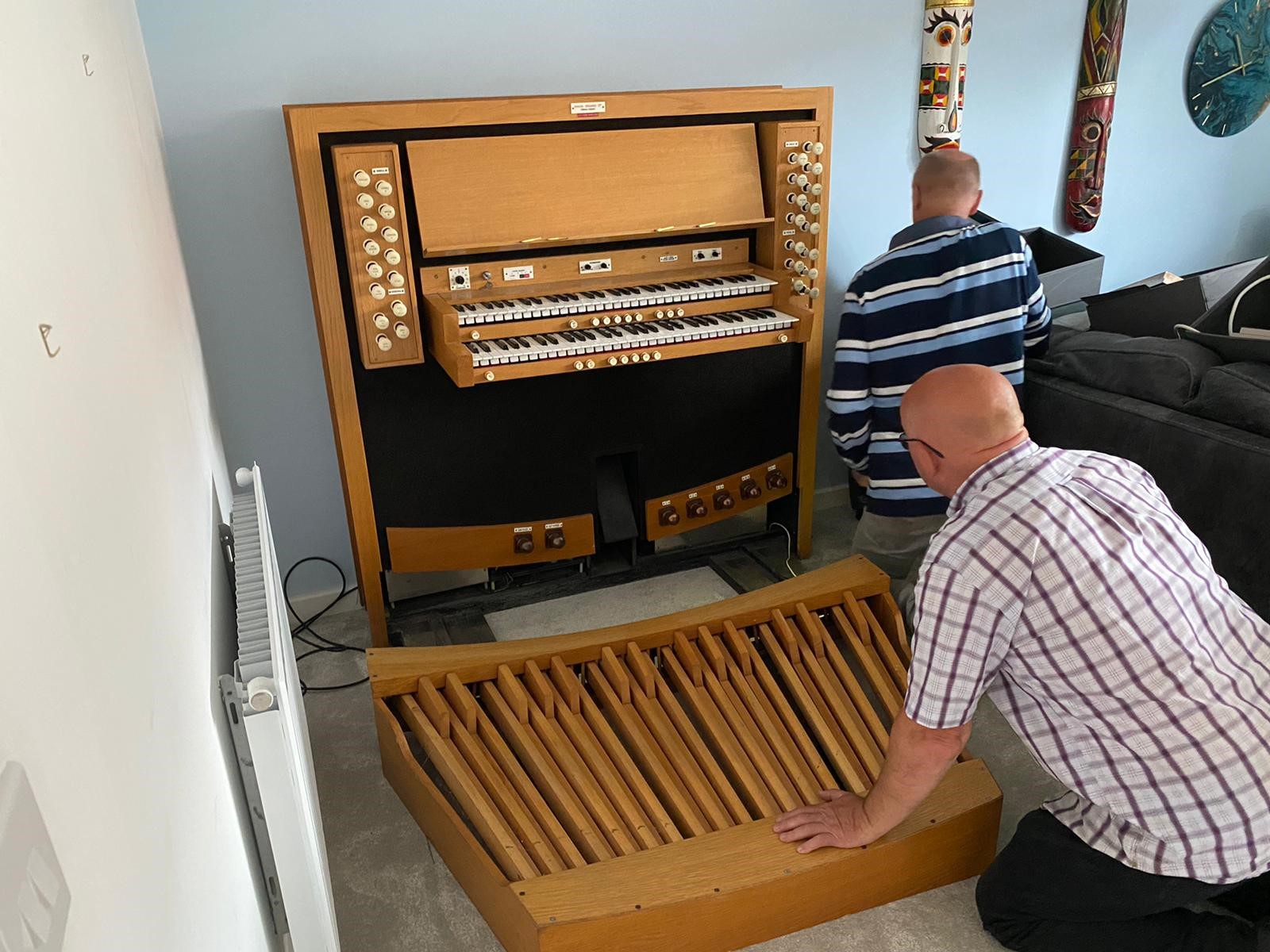 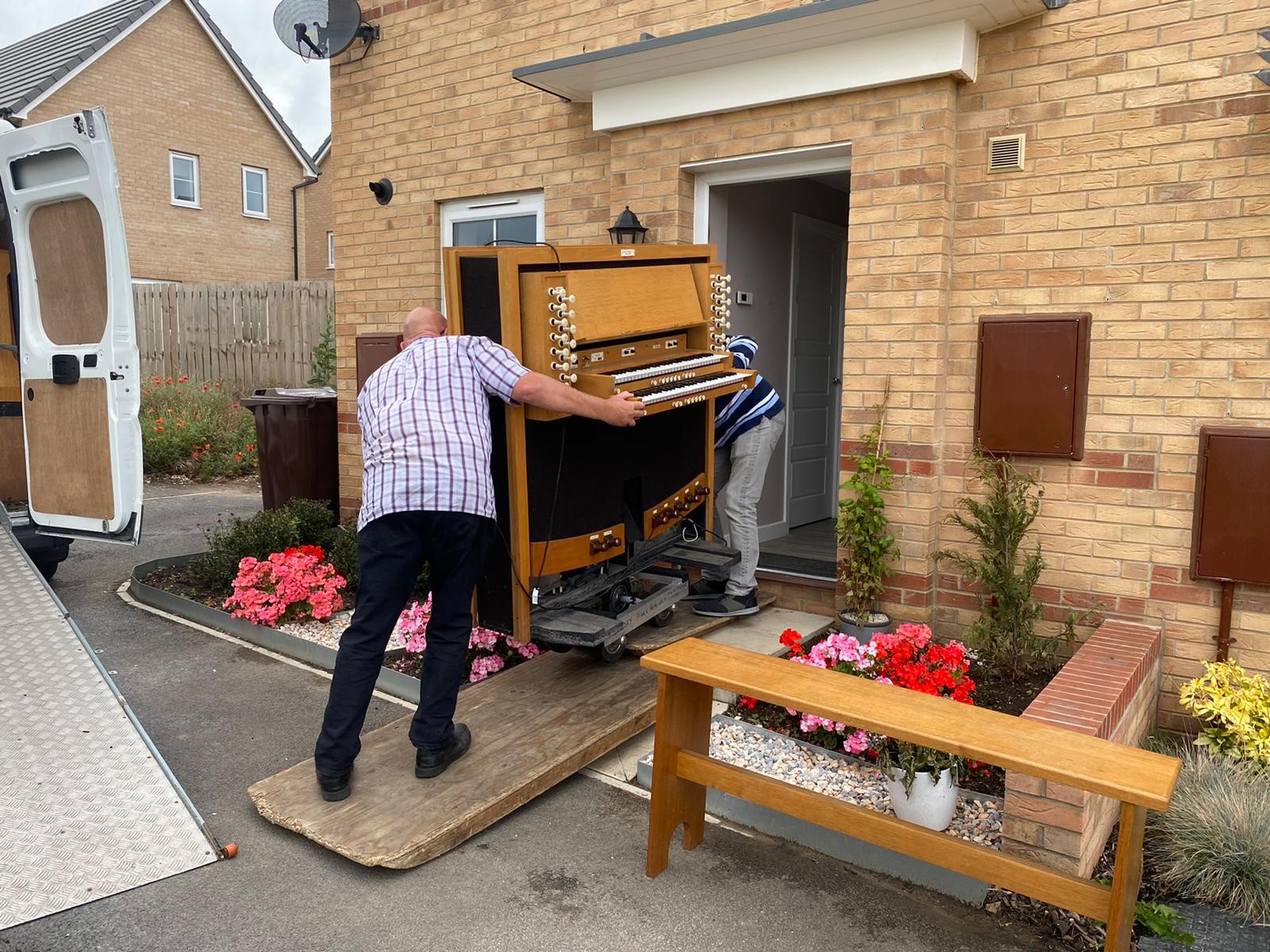 There was a cipher on the G on the bottom keyboard – basically, the note was sticking. The key itself needed a new wire, re-solder and finickity adjusting. I also tweaked several others whilst I had the keyboard and soldering iron out.

Soldering iron at the ready!

There was a unreliable G# on the pedal-board, it sounded like my old Citreon C1 when it ran out of petrol on a busy dual carriageway. After a fair bit of unscrewing, I cleaned all the contacts on the back with WD-40 and adjusted the G# and others as needed. It sounded perfectly after this DIY maintenance.

Finally, the toe piston gave the organ a series of panic attacks when pressed. This was simply solved again with a good clean inside. I’m sure my wife wishes these cleaning skills were transferable to the kitchen or the cat litter tray!

Phew! A fully working, if albeit, slightly dated sounding instrument. This, in its current state, was more than enough to get me going again. Buxtehude here I come!

After a thorough hoover anyway....

In the future, I’m planning to fully Hauptwerk the instrument which I will cover in a future post.

Nothing can beat the pure exhilaration of playing an organ, in the pipe, so to speak BUT I wanted something well built, reliable and DIY upgradable. My soldering skills really came in useful to get the 31 year-old instrument back into a playing organ.

One thing is for sure, the neighbours are going to hate me!